Posted on September 25, 2012 by dakotasoulsisters

Josephine Huggins was “the most beautiful woman he’d ever seen,” according to a young soldier quoted in Mary Ann Huggins Kerlinger’s journal. Josephine is pictured with her daughter Letta.

Sophia Huggins, always called Josephine by her friends and family, doesn’t really qualify as a woman of the Dakota mission but in terms of her experiences and close relationship to the women of “Soul Sisters,” her story definitely belongs here.

Josephine introduces her own story with this opening paragraph from The Saint Paul Weekly Press – February 12, 1863, p. 3:

“The nineteenth day of August, 1862, dawned on me full of hope and happiness. It was the 24th anniversary of my birth. But before its close it proved to be the saddest day of my life. News of the war which broke out at the Lower Agency on the 18th did not reach Lac-qui-parle until the next day. Then it came with fearful suddenness and fearful reality.”

Josephine and her husband, Amos Williamson Huggins, 29, had come to Lac Qui Parle, Minnesota, in 1861 to operate a government school for the Dakota in the area. They had been married in the spring of 1856 and had two children. Eletta Sophrina Huggins, known as Letta, was born on April 5 ,1858, and Charles Loyal Huggins, called Charlie, on April 19, 1861. Letta was four years old on that fateful day in August 1862 and Charlie just 16 months. Josephine may not have known that she was a few weeks pregnant with their third child.

By all accounts, things were going well at the school, where Amos enjoyed teaching singing as he accompanied the students with his violin. Amos’ sister, Mary Ann Huggins Kerlinger, recalled a story about Amos and the students in her Journal. “He was a good singer and had a choir of boys. One evening after much preparation and coaxing, for the Indian youth is very reluctant to try new things, he set out with his choir to seranade the boarding school. All ready on the steps, the violin started. Mr. C. probably not understanding the plan, opened the door and every boy ran, leaving the teacher alone.” [Kerlinger Journal, p. 184]

Mary Riggs described the Huggins cabin at Lac Qui Parle, “The house Mr. Huggins has at Lac Qui Parle is of hewed logs, the ends above the logs enclosed with green elm boards fastened perpendicularly without battens or weather boarding.” [Riggs, Stephen, Mary and I, p. 237].  In addition to their home, the site included a barn and out buildings since Amos not only taught school, he also farmed and taught the Indian students how to break ground with the oxen pulling the plow.

He spent the afternoon of August 19, 1862, working the fields and arrived back at the cabin around 4 p.m. Josephine was inside with Julia LaFramboise, the other teacher at the school, and the children. They were talking with three Dakota men who were asking questions about the sewing machine that Julia was using. All three were carrying guns but the women were not alarmed. The men were from Red Iron’s village and they knew them from previous encounters. One of them was just a young boy name Tatekage/Makes the Wind, about 14 years old. He was the grandson of the Lac Qui Parle chief, Wakanmane, and is described as being “mentally deficient.” Tainna/Leather Blanket was there as well as Hosidhi/He Brought the News.

When the men heard Amos arrive with the oxen, they went outside to greet him. The next thing the women heard was the sound of two gunshots. They were then startled by the Dakota men rushing back into the house, looking frightened and wild. Josephine thought that perhaps they’d encountered some Chippewa outside, their lifelong enemies. Instead, as Julia ran out to see what had happened, Josephine followed and found Amos already dead from two gunshot wounds. 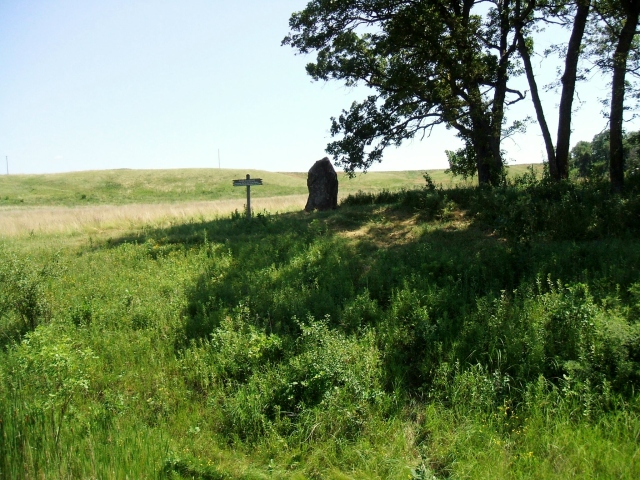 I recently had occasion to visit the site, pictured above, where the Huggins’ home once stood. It was a hot, sleepy afternoon in July 2012, 150 years after the tragic murder of Amos Huggins. The sky was blue, the wind in the grass and the chirping of the cicadas offered a soft cacaphony of the omnipresent song of the prairie in summer. I felt a tremendous sense of “place,” an identity with the story of the site that can only happen when one is able to physically be present where something memorable happened. I could easily visualize the chaos which took over the peaceful scene as the gunshots rang out and Amos fell dead. The Indians shouted at Josephine and Julia to take the children and go – to leave everything and just go.

I imagine the terrifed women carrying Letta and Charlie and trying to run through the tall grass in their long skirts, not knowing who to trust or where they might find safe haven. Perhaps the children were laughing at this new game, unaware of what had happened, or perhaps they picked up on their mother’s tension and fear and began to cry. It was early evening and no doubt they felt a sense of urgency to reach safety before darkness fell.

Today the site is marked by a small sign erected some decades ago and by a new stone marker that the Lac Qui Parle Historical Society is preparing.

Josephine tells the story of their experiences in the Saint Paul Weekly Press article which you can read in its entirety by clicking on this link. Sophia Josephine Huggins Memoir. The document is transcribed from a copy of the newspaper that is in the Minnesota Historical Society, Alexander G. Huggins digitized manuscript collection.  I have also added biographical information on the individuals Josephine mentions in the story, including Sacred Nest, Walking Spirit and the four Dakota men whom Henry Sibley sent to bring Josephine and the children home.

Josephine’s story is remarkable in many ways. Unlike so many captivity narratives of the 1862 war, this document does not demonize the Dakota, nor are the events or dangers exaggerated or enhanced with violent and dramatic details. Josephine instead writes:

“How thankful I was when I went in and met a kind welcome from the chief’s wife. Here I found food and rest for myself and children. I was so tired, so sad, that I did not try to speak or ask for anything but she seemed to understand how I felt and kindly, even tenderly, supplied my wants.

“Walking Spirit was not at home and did not come home until several days afterwards. When he came and saw me, his cheery, “Ho-ho-ho,” as he held out his hand to me, sounded very pleasantly. Then he talked to me very kindly, I know, though I could not understand much of what he said. I understood that he told me to stay there in his house and that when he could he would take me to my friends below. My poor, weary, anxious heart felt comforted. This old man was my friend and protector. I could here find something like rest and security.

“For the next six weeks, I found a home in Walking Spirit’s family. True, I was a captive, in an enemy’s country, longing for deliverance – subject to many inconveniences, many hardships – but the chief and his wife were kind to me, and made my troubles as light as possible. Here I learned patience. Here I gained strength and courage. My husband’s Bible was my daily companion, and I felt that God, as a loving Father, was ever watching over me and my fatherless little ones.”

Josephine and the children returned to Amos’ family in Traverse des Sioux after their release. She wrote to missionary Stephen R. Riggs to appeal on behalf of Sacred Nest, who was found guilty in his military trial after the war. Riggs wrote to his wife Mary on November 13, 1862, indicating that he had received Josphine’s letter but Sacred Nest was imprisoned at Mankato, Minnesota and subsequently at Davenport, Iowa, with the other Dakota who were convicted. Walking Spirit’s grandson, Tatekage, was executed at Mankato, Minnesota, on December 26, 1862, having been found guilty of the death of Amos Huggins.

Josephine’s father, Thomas Marsh, came to Minnesota from his home in Illinois immediately upon hearing of her captivity. They were joyfully reunited in St. Peter, Minnesota, and Josephine went to Illinois with him. She gave birth there to Amos Williamson Huggins on March 24, 1863. Named after his father, the baby reportedly was born with a red mark on his forehead in a spot corresponding to the place where his startled mother had thrown up a hand on witnessing his father’s death.[http://wc.rootsweb.ancestry.com/cgi-bin/igm.cgi?op=GET&db=khig2&id=I5299]

This second Amos, wrote in his own biography: “My mother, a widow with three small children, her house burned, having no means of support, returned to her father’s home. This was a farm four miles from Abington, Illinois and 20 miles from Galesburg. The household was her father, two sisters – Frances and Hannah – and a brother Leroy. They lived in an old farmhouse….a lean-to of one room was added which was to be for my mother and her children. The children had to sleep on a trundle bed.” [“Sketch of the LIfe of Amos Williamson Huggins by Himself,” 1933, p. 2, Minnesota Historical Society, Alexander G. Huggins digitized manuscript collection]

Amos recalled being at the farm in Illinois when he was three or four years old but it wasn’t long before he and his brother Charlie were living with Jane Sloan Huggins Holtzclaw. Family memories record that Jane raised the boys. One letter from Jane to Josephine exists in the digitized Huggins Manuscript collection at the Minnesota Historical Society. Written on March 18, 1874, Jane writes to “My dear sister Josephine….the boys received your letter today with the pictures. They were very pleased… Give my love to Letta…” Jane was living in East Minneapolis when she wrote.

Josephine remarried in 1869 when Letta was eleven; Charlie was eight; and Amos was six years old.  Her new husband was Isaac W. Hanthorn. As noted in the story about Lydia Pettijohn Huggins, Josephine’s former mother-in-law Lydia moved to Illinois at some point after her husband Alexander died in 1866. There is nothing in any of the family journals to indicate when that move took place but it does make it appear that although Josephine had a new husband, her ties to Amos’ family remained strong. 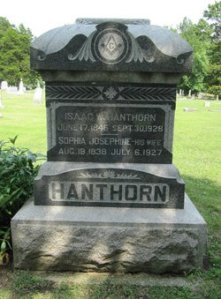 Josephine and Isaac Hanthorn had two children, a daughter who is only identified as Mrs. Elroy Gallaher, and a son, James Hanthorn, who was born in 1875. In the 1900 census, Letta was 44 years old, single and living with her mother and stepfather in Windsor, Missouri. A complete story about the Hanthorne family can be found at http://files.usgwarchives.net/mo

My thanks to Patricia Huggins, who granted permission to use the photo of Josephine and Eletta. I took the photo of the Huggins homesite and Josephine’s tombstone is from the Hanthorne family website referenced above.